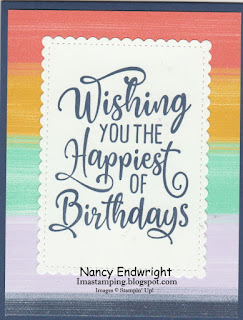 It seems I always need a birthday card or a sympathy card.  Birthday cards are definitely a lot more fun to make, so today I made a quick birthday card with my Happiest of Birthdays set which I recently purchased from Stampin' Up!  I'm hoping my card helps to cheer up my niece on her birthday next week.
Here are my easy instructions for this card:

3.    The third layer is Basic White cardstock cut at 3-1/2” x 4-1/2”.  Ink up the sentiment “Wishing You the Happiest of Birthdays” with Night of Navy ink and stamp in the center of the Basic White.  Die-cut the sentiment out with the largest stitched rectangle die from Stitched So Sweetly Dies. (Or die-cut it out before stamping).

4.    For the Inside:  Ink up the sentiment “It’s You Day! Enjoy it” with Night of Navy ink from the Happiest of Birthdays set and stamp it on 4” x 5-1/4” Basic White cardstock.

Posted by Nancy Endwright at 11:50 AM No comments: 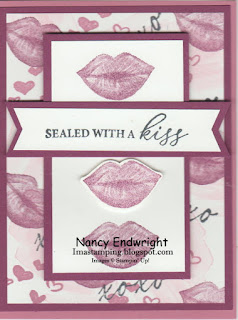 Don't you love those big lips??  That was one reason I bought this stamp set from the 2021-January-June Mini Catalog on page 14.  It's a DistINKtive 2-step stamp set which gives it a photo, realistic image.  I hadn't used it yet and while watching some videos, I liked the card that Kelly Acheson made and decided to make one too.  I didn't have the ribbon she used, however, but I like it just as well.  I did like the colors she used so I included them on my card.  The technique she used is called a collage.  It makes great background paper for cards or scrapbooks.

6.    Ink up another lip with Rich Razzleberry and stamp on a scrap of Basic White.  Punch it out with the Kiss Punch and adhere it just above the bottom lips.

7.    Take a strip of Basic White that is ¾” x 4” and stamp “Sealed with a Kiss” in Tuxedo Black Memento ink.  Use the Banners Pick a Punch to flag the ends to make it a banner.  Adhere to a layer of Rich Razzleberry cut a little larger.  Add Dimensionals and put it below the first lips at the top.

8.    Attach to the front of the card with Dimensionals.

9.    For the inside:  Ink up the “Happy Galentine’s Day” Stamp with Rich Razzleberry and stamp on the center of the Basic White.  Punch out a Rich Razzleberry heart with the Kiss Punch.   Adhere below the sentiment.

These are the products that were used:

Posted by Nancy Endwright at 10:00 AM No comments:

Do you like chickens???  You will love these two sets with bundles starting on February 2nd. This card took a bit longer to make because of all the die cutting, but I cased it from a card I saw on the Stampin' Up! website.  This Hey Chick stamp set was from a 2017 Sale-a-Bration set that Stampin' Up! is bringing back along with a die to go with the set.  The Hey Birthday Chick can be purchased now from the 2021 January-June Mini Catalog on page 52.  However, if you want the die to go with it to purchase as a bundle, it will be available on February 2nd as well as the Hey Chick Bundle.  Here are the instructions for my card:

2.    The second layer is Basic White cardstock cut at 3-1/4” x 8-1/4” as well as the inside layer so cut two. Use the Blending Brush and Balmy Blue to color in the background of each scene.

3.    On scraps of Basic White cardstock, ink up the three big chickens as shown on the front with Tuxedo Black Memento ink.  Color them in with the Stampin’ Blends.

5.    Ink up the sentiment “Happy Birthday” and “You’re still a Spring Chicken with Tuxedo Black Memento ink on Basic White cardstock.  Trim them out with the Paper Snips and attach them with Dimensionals.

6.    For the inside:  Ink up the sentiment “Let’s Celebrate You” with Tuxedo Memento Black ink and add the goofy chicken with the cupcake and color him in with the Blends.  Adhere to the inside. 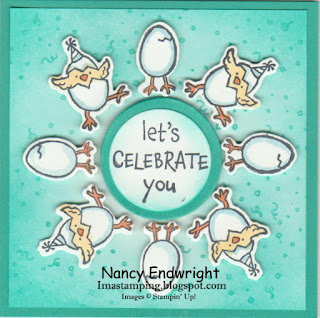 This card uses a stamp set from the 2017 Sale-A-Bration called Hey Chick. but I loved that set so much that I'm glad I kept it, but if you don't have it, guess what?  It is coming back on February 2nd as a Cling-Mount set and it has a new die to go with it called Chick Dies which you can purchase separately or as a bundle.  The Hey Birthday Chick is in the 2021 January-June Mini Catalog on page 52 and it will also have a Birthday Chick Die you can purchase as a bundle or separately.  Both sets coordinate with each other so I used the egg from the old set and the little chick from the new set.  I was inspired to make this card from a sample I saw on the Stampin' Up! website.  I used Bermuda Bay cardstock and Basic White to make this card.  Here are the rest of my instructions:

3.    Ink up the confetti stamp with Bermuda Bay ink and stamp randomly on the Whisper White cardstock.

4.    Ink up the sentiment “Let’s Celebrate You” in Memento Black ink and die cut with the Layering Circles Dies in the Stampin’ Cut and Emboss Machine.  Die a larger circle with the next largest die using Bermuda Bay cardstock.  Adhere together and pop them up with a Dimensional in the center of the card.

6.    Put a Dimensional on the back of each one.  Start with an egg at the top and go around in a circle with a chick, egg, chick, until your complete the circle

7.    For the inside:  Ink up the “Happy Birthday” sentiment with Bermuda Bay ink and stamp in the center of the card.  Use the Blending Brush and confetti stamp to decorate the inside.

These are the products I used:

Nancy Endwright
I'm an Independent Stampin' Up! Demonstrator in the USA. 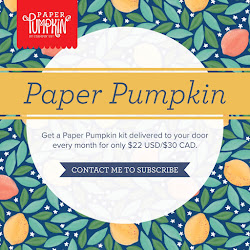 Information about my blog:

"This is my personal blog, I am an Independent Stampin' Up! Demonstrator, and I am responsible for its content. Stampin' Up! does not endorse the use of or contents of the classes, services, or non-Stampin' Up! Products I may offer here."